Docker / Rancher [WSL] - where is my free space?

[The article is also valid for Rancher Desktop]

I'm playing a lot with Docker, but on my local computer, I usually do not pay a lot of attention to disk consumption (thank you, my Very Large SSD). But when you are dealing with big images like ABAP Platform 1909 (around 60GB), after a few docker commit and docker save warning lights started to blink in my head when I was looking at the radically decreased free space...

Normally, when the disk is getting full (or from time to time), you run docker <object> prune and voila, some disk space is back.

At least it should, but that was not the case with my Docker with WSL2 integration. I had copies of my ABAP Platform image and about 20 other, unused images. After removing them, I was expecting about 70GB of free space, which was also clearly stated after running docker images prune -a. Surprisingly, the difference on the disk was... 3GB 😕.

Luckily, there is a thread about this issue. I checked the size of my Docker vhdx file - 250GB. This number was really suspicious. I would not expect that even the ABAP Platform container could generate so many data or layers.

I work on Windows Home, so I could not use Optimize-VHD cmdlet. But the solution described with diskpart worked well (IMPORTANT! Some people in the thread say that the method described corrupted their vhdx file). 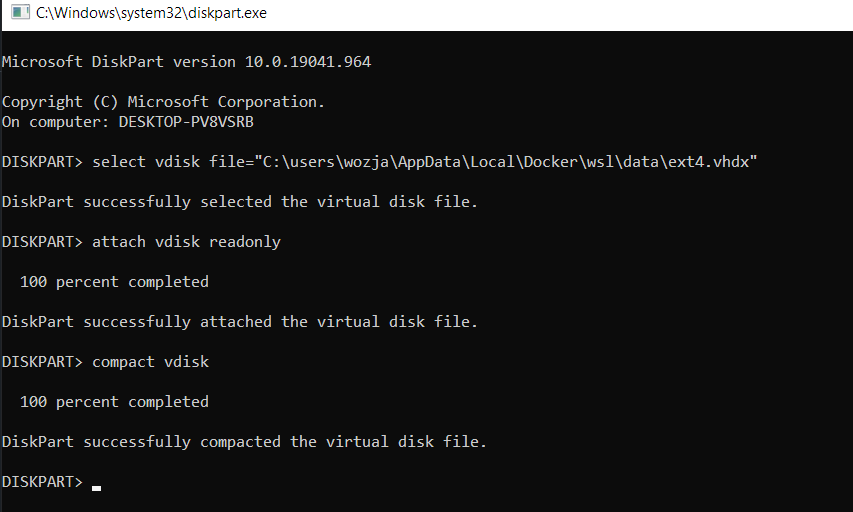 After all I reclaimed ~138GB and all is working good 👌.

Thanks for reading! Read other posts?
←  From Docker Desktop to Rancher Desktop From ABAP to full stack  →